About the Jam’n Java Open Mic

The Jam’n Java Open Mic, now in it’s tenth year, was established to provide a free, live music venue for the Arlington community and a supportive environment for area performers.

Performers range from individuals simply wishing to share their music with others to aspiring local performers looking for a venue to try out new material and polish their performance skills.  Performers as diverse and as influential as Bob Dylan and Lady Gaga got their start and honed their skills playing at open mics such as this.

The coffeehouse format provides a relaxing setting to see and listen to performers close up. And who knows,  you might be listening to the super star of tomorrow!

A special thank you to the management and staff of Kickstand Cafe who have generously made their facility available to us and have extended their hours of operation to make this open mic possible.

The Jam’n Java Open Mic at Kickstand Cafe is organized and hosted by Arlington residents Mark Sandman and Joe Burns, with the assistance of co-hosts Dianne (De) Iannitelli, Glen Woodworth, and Gary Goldsmith.  And new to the Jam’n Java team and  bring a wide range of performing, hosting, and internet skills, needed for our virtual open mics, are Ken Karnofsky, Gene Albert, and Rick Cohen.

Mark Sandman has been involved in the Boston folk music and
coffeehouse scene since his college days as both a performer
and founder of two coffeehouses.

While in college, he organized the Moon in Virgo Coffeehouse on the Northeastern University Campus, and later founded and managed the Golden Cockerel coffeehouse located near Boston University.

In addition to co-hosting the Jam’n Java Open Mic, he continues to
perform, singing and playing a combination of original material, blues,
and timeless classics. Mark is also an independent marketing services professional providing services including copywriting  for web and print, search engine optimization (SEO), photography, and photo editing services.

Joe Burns’ musical career took off in high school when his rock group won a battle of the bands competition catapulting them into the local spotlight.  Following high school, he moved to California where he was exposed to many different music styles and played in groups performing in the Pacific Northwest.

Moving to Athens, Georgia, Joe was the guitarist for the Randy Anderson Sextet which was the opening act for Arturo Sandoval and Freddie Cole.

In addition to co-hosting the Jam’n Java Open Mic, Joe enjoys being a stay-at-home Dad to his two boys and is working on several musical projects between loads of laundry. 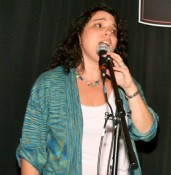 Dianne Iannitelli’s musical interests began at a young age. As a child, she was part of a family band led by her father, a professional musician and music teacher, that played at parties and functions.  As a teen, she played oboe, piano and xylophone in the high school marching band. After college, she focused  on voice, singing soprano with the Mystic Chorale and then Halalisa Singers  a  small elite chorus focusing on world music.

Her desire to learn guitar and perform solo at open mics began about 3 years ago and she has been learning and growing as an artist ever since. She also plays  Djembe, an African hand drum and enjoys playing with other drummers whenever possible.

When she’s not hosting the open mic, Dianne works as an Occupational Therapist, and enjoys singing with her 13 year old daughter Emma.

Glen Woodworth is an accomplished writer/song-singer from Marlborough, MA. In the 1990’s, he fronted the legendary Cape Cod indie band The Harmful Side Effects. Glen enjoys singing and playing with his friends and bandmates, De & Joe, also know as The Harmonators, as well as with all those friends he hasn’t met yet. It’s been brought to Glen’s attention that both of his major musical projects have had the word “harm” in their names.” However, he is one of the nicest guys we know!  On open mic nights Glen can often be found running our soundboard. Yes, he’s the guy who helps make every performer that takes our stage sound their best.

Gary Goldsmith grew up listening to jazz, show tunes and, since his mother was a symphony violinist, lots of classical music. He started playing music at 15, when he, folk music, and rock were all young.  And  he has been playing, writing, and performing ever since.  All these influences shaped the direction and diversity of my music.

Gary had the good fortune during college years of hearing many of the prominent blues musicians of the time and got to take lessons for a while from Reverend Gary Davis and Brownie McGhee.

Over the years, he has been a member of various rock bands.  In recent years, he has performed throughout the area as a solo act, he is also a member of the Fretbox Trio, a multi-generational group that is active on the Boston music scene. They have released three albums of original tunes.

Stephanie Marlin-Curiel launched the Jam’n Java Open Mic in June, 2009, as part of her ongoing efforts to cultivate the arts in her home town of Arlington, Massachusetts.  While no longer involved in the day-to-day operations of the open mic, she still plays an active roll as an advisor.  Her warmth and charm was instrumental in setting the tone of the Open Mic as a welcoming and supportive environment for performers and audience alike.

In addition to her involvement with the Jam’n Java Open Mic, Stephanie is an active member of the Arlington Cultural Council and the Arlington Public Art Committee and is a professional event planner and community organizer.

It takes a village to make our open mic happen. Well, at least a few dedicated people! If you would like to be a part of the Jam'n Java Open Mic, email us at: music@jamn-java-open-mic.org. Please provide contact information and tell us a little about yourself.